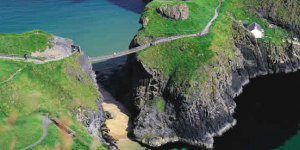 Game of Thrones the blockbuster TV show is shot entirely in Northern Ireland. The majority of the filming is done on the Antrim coast, with many of the scenes being shot within a few miles of Cushendall village. Our staff can recommend locations that are only known by locals where the hit TV show has been filmed. Game of Thrones filming locations such as Ballintoy Harbour, Gallbolly Village, Cushendun, Glendonal Damn and many more are all within 20mins maximum by car.

The Giants Causeway is 30mins drive from Riverside B and B and is a Unesco World Heritage Site which ranks alongside Mount Everest and the Giant Redwoods of California in Yosemite National Park. The journey from Riverside to the Giant’s Causeway along the Causeway Coast road is one of the most dramatic coast roads in the world with the road winding it’s way along jagged cliff edges and white sand with views overlooking Rathlin Island and the rugged west coast of Scotland.

The world famous Bushmills distillery is only 30mins drive away and is a perfect day trip where you can tour the Bushmills Whiskey distillery and sample some of the world’s oldest whiskey. Bushmills is a few miles up the road from the Giants Causeway and Carrick-A-Rede Rope Bridge.

To check availability, get in touch HERE